Tampa is a major city in the U.S. state of Florida located on the west coast of Florida. The word "Tampa" may mean "sticks of fire "in the language of the Calusa, a Native American tribe that once lived south of today’s Tampa Bay. This might be a reference to the many lightning strikes that the area receives during the summer months. For further information on Tampa's history see http://www.visittampabay.com/visitors/visitor-information/history/

Tampa displays a wide variety of architectural designs and styles. Most of Tampa's high rises demonstrate Post-modern architecture. The design for the renovated Tampa Museum of Art, displays Post-modern architecture, while the city hall and the Tampa Theatre belong to Art Deco architecture. The Tampa mayor as of 2008, Pam Iorio, has made the redevelopment of Tampa's downtown, especially bringing in residents to the decidedly non-residential area, a priority. Several residential and mixed-development high-rises are in various stages of planning or construction, and a few have already opened. Another of Mayor Iorio's initiatives is the Tampa Riverwalk, a plan which intends to make better use of the land along the Hillsborough River in downtown where Tampa began. Several museums are part of the plan, including new homes for the Tampa Bay History Center, the Tampa Children's Museum, and the Tampa Museum of Art.

The above information was found at: http://en.wikipedia.org/wiki/Tampa,_Florida
© Maggie Deegan Photography 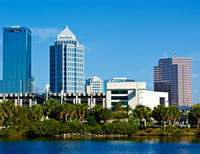